Kara Rosemeier from the Passive House Academy will be running a seminar in the mostly completed home on the 13th of May, from 6:30-8pm.

More information can be found here:

and the enroll page is here:

If you’re wanting a good introduction to Passive Houses from an expert, and get a sneak peak of the home in its final finishing stages, we would recommend coming!

We’ve had quite a few tradesmen on site over the past month, and here’s an update of progress:

1. All the flashings and guttering has now been installed, and the downpipes are being connected to the two 25,000 Litre water tanks later today. This will be well received, as we’ve been accumulating extra water around the site, and some unplanned run-off to the neighbours.

2. The exterior of the home has been 95% painted with Dulux paints, and all the scaffolding has now come down, making the home seem almost complete from the outside.

3. The solar panels have now all been wired up by Toby from Power Technology, and are ready to connect to the two inverters which will now be placed in the upstairs plant/storage room along side the Zhender ventilation system. The inverters can heat up to 80 degrees and need a clear space around them and ventilation. Brad from Efficient Air is adding in another extraction point from the plant room (to the Zhender), so we can either re-use this energy and circulate it through the home on cooler days, or on hot days use the summer bypass (around the heat exchanger) and ‘dump’ the extra energy outside.

4. The wiring by AWS & Tradepartners is almost complete, and the balance of the data and security from Ideal Electrical should be finished this week. AWS have laid a main trunk ducting line down the centre of the home and then branched off from this point. The trench for the main line from the road (grid-tied PV system) is being dug this afternoon, and Chorus will also be installing the fibre optic connection (for our Orcon connection) down that trench tomorrow. We’ve chosen all of our LED lights from Philips and should be taking delivery of these soon. We’ll go through and detail each fitting later.

5. Our landscaper will be starting to install the Firth Country Manor retaining wall down the Western side of the boundary next week, and then when the rest of the building supplies are moved off the site into the home, he can start working on the rest of the section. He will also be installing all our patios, and permeable pavers for the driveways, and raised veggie gardens.

6. The plumbing by AllGo for pre-lining has all been completed, including our in-wall Villeroy & Boch cisterns, bath, as well as the Grohe shower and bath mixers. It will be great to have a bath again for the kids! Something we’ve missed renting for the past 2 years while we worked on this project.

7. The builders have now installed all the 50mm horrizontal battens on all the exterior walls, and are due to install all the Hume Doors in the next week. These were supplied via Cowdroy (cavity sliders) and Doorways for the standard pre-hung doors. Most of the doors are 2.4m high, and solid core to control noise.

8. The ducting for the Beam central vac system is mostly finished, and will be completed once the flooring system gets laid (after plasterboard lining).

9. Lastly, the Rondo ceiling system should be delivered this week, and then installed by the team at Apex Ceilings next week. At the same time, they’ll place R2.8 insulation in the bottom of all internal walls (touching the concrete) as well as the 2nd layer of 50mm Earthwool(r) glasswool insulation between the battens on all the exterior walls. We hope to have all the plasterboard lining up within the next 2-3 weeks. Then we can move onto stopping.

10. We have now completed three blower door tests, thanks to Jon from pro clima and Andy Ong from PHINZ. Andy has completed two tests for us, and thanks to the help from John at Tech Rentals and the loan of a thermal camera, we stayed up late one night and tried to find every hole in the air-tightness layer we could. I’ll post some more images of the thermal photos once I can convert them. We found weaknesses where we had missed joining the intello, where the tape wasn’t pushed firm enough against the membrane, weak points around windows, and where the Intello had been left for some months in the weather and been compromised. We also found areas where tradesmen had cut through the intello (for wires etc.) and fixed these up. We’re sitting around 0.5 air changes per hour at 50 pascals under positive pressure, and 0.6 for negative pressure, and are aiming to get this down to under 0.5 for both once all the Rondo ceiling system has been installed (providing extra support to the Intello under negative pressure).

11. We’re having some issues installing our Bodart & Gonay fireplace from Belgium, and the fire technician will try one more time to seal and insulate the flue, as we had isolated this during our blower door testing. The fireplace is for ambiance, and after those cold winter days down on the sports field (not for general heating), as we won’t need a heating appliance in the home. If we can’t get it working, we’ll need to remove and sell it to someone that wants to either install it in a masonry chimney (in a Passive House) or for a normal home, and then we’ll replace it with a small bio-fuel fire that doesn’t require a flue.

Click here or on the image below for some updated photos: 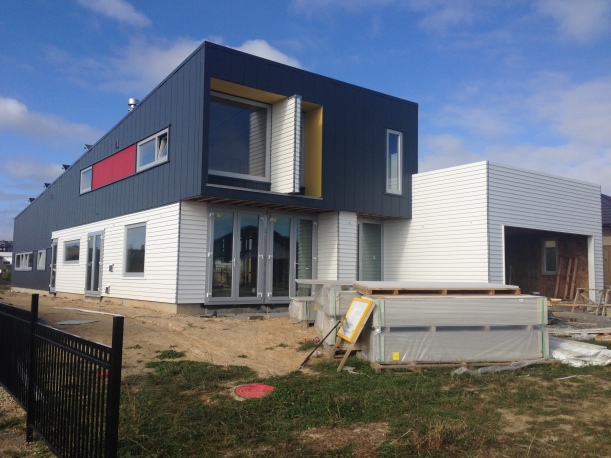